WE’RE GOOD TO GO!  We can holiday to Cambodia without having to quarantine either on arrival in Cambodia or on our return to the UK. There are also no travel advisories in place against travel from the FCDO meaning you can book with complete peace of mind.

Discover the magic of the Mekong River, unique Cambodia & Vietnam in style –  exclusively with Solent Events on Tour!

Following the many adventures Solent Events clients have enjoyed touring Asia over the past 10 years, we will begin our new experiences in Vietnam & Cambodia in luxury, aboard the newest ship on the river – Wendy Wu’s own Victoria Mekong, before venturing into the depths of Cambodia and relaxing on the wonderful beaches of Vietnam!.

Victoria Mekong is the newest vessel to cruise this part of the delta,  launched late in 2019, this beautiful ship offers an exclusive itinerary to hand-picked ports along one of the most enchanting stretches of the Mekong. This magical section of the river delivers wonders at every turn, from Cambodia’s enchanting capital, Phnom Penh, to the lush, green landscapes of Vietnam. The Victoria Mekong is the greenest ship on the river blending state-of-the-art eco-credentials with 4* comfort and superior service. With just 35 passenger cabins you are guaranteed a genuine ‘small ship’ experience.
Spacious, stylish staterooms all come with floor to ceiling windows, private balcony and individually controlled air conditioning. On board you will find an infinity pool, spa, gym, movie room, games room, boutique and even mini golf. The Victoria boasts a spacious oasis of modern tranquility furnished in natural wood with a muted palette of soothing earth tones. Deluxe Staterooms are located on  the River Deck and Panorama Deck with spacious aft-facing VIP Suites on the ship’s Panorama Deck.

All excursions and on-board entertainment are included for the duration of our cruise as are all meals, local beers, soft drinks and house wine with dinner.

Before and after our river cruise we will stay overnight in Phnom Penh, with three nights aboard the Victoria Mekong and two nights in Saigon, before finally relaxing in the beautiful Vietnam Pandanus Beach Resort at Mui Ne. See itinerary below.

A cruise, tour and beach holiday in Cambodia & Vietnam will be like nothing else you have experienced!

NB. For the comfort of all our clients, a maximum of 15 passengers will apply to this exclusive Solent Events tour, so if you fancy joining us, please contact us as soon as possible to avoid disappointment – and before the rest of the world discovers this brand new experience with Wendy Wu!

For full details of this exclusive once-in-a-lifetime tour with Solent Events on Tour, with a luxury River Cruise & beach resort, please have a browse through the proposed itinerary below. 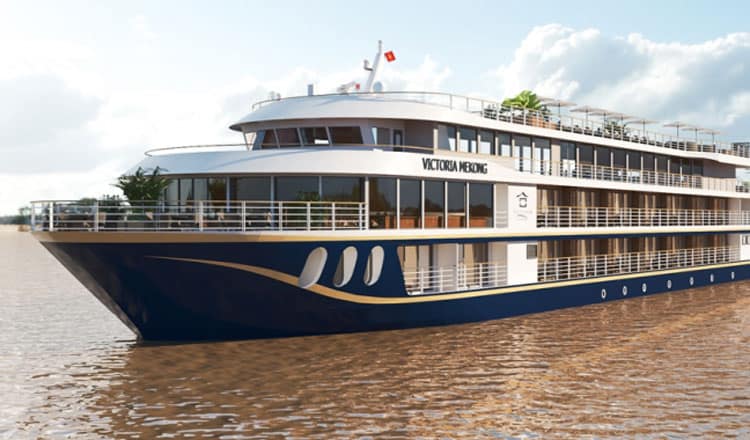 For your peace of mind and financial protection, our holiday has been arranged with Asia | China specialists, Wendy Wu Tours, who are fully bonded by ABTA, ATOL & IATA.

FINAL departure, flight and arrival times to be confirmed, but the times stated will give you an idea of the timings:

DAY 2:  Saturday 15 October – Phnom Penh
0700    Arrive Hong Kong
0835     Flight to Phnom Penh Cathay Dragon KA208
1025     Arrive Phnom Penh
On arrival, meet guide and transfer to Hotel  for check in.
Phnom Penh is the capital city of Cambodia, situated on the banks of the Mekong River and has a mixture of traditional and French colonial architecture. Since becoming the capital city, it has grown to become the nations economic, industrial and cultural centre. Once known as the ‘Pearl of Asia’, it was considered one of the loveliest French-built cities in Indochina during its peak.

DAY 3:  Sunday, 16 October – Phnom Penh + Victoria Mekong Cruise (for 3nts)
The charming capital of Phnom Penh was once known as the “Pearl of the Orient” for its French colonial buildings, tree-lined boulevards and scenic riverwalk. From 4pm onwards, board the Victoria Mekong Cruise Ship at Sisowath Quay, Phnom Penh’s downtown riverside promenade. As the sun sets on the Tonle Sap River, linger over a drink on the sundeck while taking in a performance of Khmer Apsara dancing by a troupe of disadvantaged children with the opportunity to meet them after.

As day turns into night, sit down to a gala dinner to officially welcome you aboard your Victoria Mekong Cruise. Tonight, the ship overnights at Sisowath Quay.

DAY 4: Monday 17 October – Victoria Mekong Cruise
As the ship begins cruising towards the Cambodia-Vietnam border, enjoy breakfast in the restaurant. After, select from the many on-board activities including a ship’s tour, cocktail competition and cultural lecture while the ship sails into Vietnamese waters.

At the border area of Vam Naoin the Mekong Delta, go offshore by sampan to visit a few traditional cottage industries, such as traditional clay pottery and local rice cakes. Return on board in time for a traditional Vietnamese lion dance.

DAY 5: Tuesday 18 October – Victoria Mekong Cruise
Wake up to another leisurely breakfast as the ship cruises towards the provincial capital of Long Xuyen in the Mekong Delta. Tender ashore to visit the colourful Long Xuyen Floating Market and the An Giang Museum, with fascinating exhibits on Vietnamese, Chinese, Khmer and Cham cultures in the region.

Return to the ship and enjoy lunch as you cruise towards Tan Loc Island where a selection of shore excursions awaits, including tea served in a historic century-old house featuring Chinese, French and Vietnamese architectural elements. You may also travel by local motorcar to a local distillery where plum wine is made. Return to the ship and cruise towards Can Tho, the beating heart of the Mekong Delta. Enjoy a final farewell dinner accompanied by a traditional Southern Vietnamese folk music performance known as đờn ca tài tử.

DAY 6: Wednesday 19 October – Victoria Mekong Cruise – Saigon
After an early light breakfast before you travel by sampan to experience Can Tho’s famed floating market, the largest in the Mekong Delta with dozens of boats laden with fruit and vegetables from the region.

Return to the ship and enjoy a full breakfast while the ship sails towards Can Tho Harbour. Disembark at the Harbour and board a coach for Cai Be where lunch is served at the elegant Le Longanier Restaurant set amidst lush fruit trees by the river. Continue to Saigon by coach, arriving in late afternoon.

We will be met and transferred to our hotel. Enjoy the remainder of the day at leisure.
Saigon, also known as Ho Chi Minh City, is the commercial hub of Vietnam and the country’s largest metropolis. It was the capital of French Indochina during the late 19th century and much colonial architecture can still be seen today. The history of Saigon is inextricably linked with the American War in Vietnam and there are many places where you can learn more about these events.

DAY 7: Thursday 20 October – Saigon
We begin our journey to the Cu Chi Tunnels by travelling through the countryside which was once a stronghold of the Viet Cong. En route, we will stop to visit a family making rice paper, continuing to the Cu Chi Tunnels. Upon arrival, watch a short video about what life was like for soldiers who lived there during the war. The cramped tunnels were central to a few of the war’s strategic operations, including the famous 1968 Tet Offensive, and they didn’t escape damage. The tunnels served not only as living quarters, but as supply routes and hospitals for thousands of guerrilla fighters. Many died there from malaria and other diseases, and a few were also born or married. Today, they are viewed by some as a testimony to the Vietnamese people’s resiliency. Return to Saigon for lunch.

This afternoon, we will explore Saigon and visit some of the important historical buildings including Notre Dame Cathedral and the colonial architecture of the Central Post Office and stroll toward the Saigon River along Dong Khoi Street. This street figured prominently in Graham Greene’s famous Vietnam novel, The Quiet American, to the Saigon Opera House, a commanding building completed in 1901. Shelled during World War II, it was used to shelter French citizens fleeing North Vietnam in 1954, the year Vietnam earned its independence from France.

We continue the tour to the Reunification Palace where North Vietnamese troops signalled the end of the war when they stormed the building and visit the War Remnants Museum which has many displays, personal accounts and images portraying the war from the Vietnamese perspective. It is a very moving experience, but be aware that some exhibits are graphic in nature. Later you will visit the Jade Emperor Temple, which is one of the oldest Chinese Temples in Saigon. Also, explore Ben Thanh, Saigon’s largest market, to watch the local traders and shop for handicrafts, textiles and souvenirs. Enjoy the remainder of the day is at leisure.

DAY 8 to DAY 14: Friday 21  October – Saigon – Mui Ne (Beach resort for 6nts)
Today we will be driven to Mui Ne. (approx 4 hours) On arrival, you will be transferred to our hotel for check in, spending the rest of the day at leisure.

Mui Ne is a perfect destination to fully relax on a white sandy beach whilst enjoying the local seafood and stunning scenery and its unique red and white sand dunes. It is also the ideal base from where to explore the dunes on a jeep, visit the local Fish Markets and quaint villages. This area is well known for its fresh fish as a massive, colourful, fleet journeys out to catch fish every morning – making a perfect photo opportunity as the set rises.

DAY 14: Thursday 27 October – Depart Mui Ne for Saigon Airport
Today we will be transferred to Saigon airport for our departure flight to Hong Kong and London Heathrow

Meals: Breakfast and those provided on the flights

We will be met at LHR and travel back to our home area by our Luxury Mini Coach.

Exact times & flights will be confirmed nearer the time  in your final Travel Pack, to be posted or hand delivered to you approximately 10/12 days before departure.